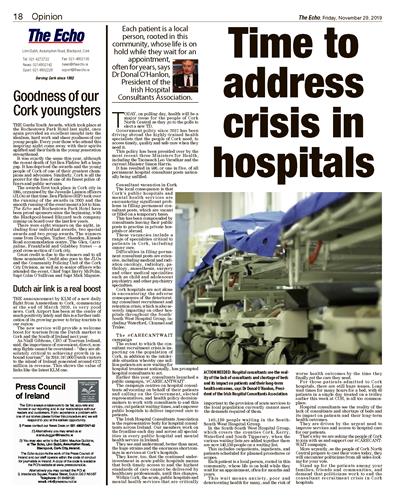 Each patient is a local person, rooted in this community, whose life is on hold while they wait for an appointment, often for months and years

Today on polling day, health will be a major issue for the people of Cork North Central as they go to the polls to elect a new TD.

Government policy since 2012 has been driving abroad the highly trained health specialists that the people of Cork need to have timely, quality and safe care when they need it.

This policy has been presided over by the most recent three Ministers for Health, including the Taoiseach Leo Varadkar and the current Minister Simon Harris. It has resulted in 500 or one in five of all permanent hospital consultant posts nationally being unfilled.

The local consequence is that Cork’s public hospitals and mental health services are encountering significant problems in filling permanent consultant posts which are vacant or filled on a temporary basis.

This has been compounded by consultants leaving their public posts to practise in private hospitals or abroad. These vacancies include a range of specialities critical to patients in Cork, including cancer care. Difficulties in filing permanent consultant posts are extensive including medical and radiation oncology, radiology, pathology, anaesthesia, surgery and other medical specialties such as child and adolescent psychiatry and other psychiatry specialties.

Cork hospitals are not alone in encountering the adverse consequences of the deteriorating consultant recruitment and retention crisis, which is also severely impacting on other hospitals throughout the South/South West Hospital Group, including Waterford, Clonmel and Tralee.

The extent to which the consultant recruitment crisis is impacting on the population of Cork, in addition to the intolerable situation whereby one million patients are now waiting for hospital treatment nationally, has prompted hospital consultants to act. Earlier this year, consultants launched a public campaign ‘#CARECANTWAIT’.

The campaign centres on hospital consultants advocating on behalf of their patients and calling on Government, elected representatives, and health policy decision-makers to work with consultants to end this crisis, cut patient waiting times, and empower public hospitals to deliver improved care to patients.

The Irish Hospital Consultants Association is the representative body for hospital consultants across Ireland. Our members work on the frontline each day and across all specialities in every public hospital and mental health service in Ireland.

They see and understand, better than most, the huge strains and the enormous shortcomings in services at Cork’s hospitals. They know, too, that the continued underinvestment in acute public hospitals means that both timely access to and the highest standards of care cannot be delivered by healthcare professionals, until this changes.

Within Cork, the acute, public hospitals and mental health services that are critically important to the provision of acute services to the local population currently cannot meet the demands required of them.

In the South-South West Hospital Group which covers the counties Cork, Kerry, Waterford and South Tipperary, when the various waiting lists are added together there is now 140,139 people on a waiting list. This includes outpatients, inpatients, patients scheduled for planned procedures or scopes.

Each patient is a local person, rooted in this community, whose life is on hold while they wait for an appointment, often for months and years.  This wait means anxiety, poor and deteriorating health for many, and the risk of worse health outcomes by the time they finally get the care they need.

For those patients admitted to Cork hospitals, there are still huge issues. Long wait times for many hours for a bed, with 60 patients in a single day treated on a trolley earlier this week at CUH, is all too commonplace.

Hospital consultants see the reality of the lack of consultants and shortage of beds and its impact on patients and their long-term health outcomes. They are driven by the urgent need to improve services and access to hospital care for our patients. That’s why we are asking the people of Cork to join with us and support our #CARECANTWAIT campaign.

More urgently, as the people of Cork North Central prepare to cast their votes today, they will encounter politicians from all sides looking for your vote. Stand up for the patients among your families, friends and communities, and demand that politicians work to end the consultant recruitment crisis in Cork Hospitals.