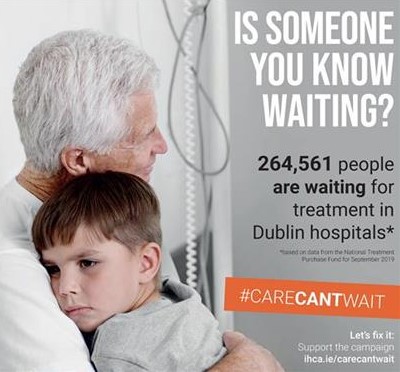 IHCA President Donal O’Hanlon: “The IHCA is not a political organisation and we do not support any politician or party over another, but as consultants on the front line of hospital care we are compelled to advocate for our patients and to support their right to timely access to care and improved hospital services”.

The Irish Hospital Consultants Association (IHCA) will today (Monday, 18 November 2019) expand its #CARECANTWAIT through a targeted advertising campaign in the four byelection areas of Dublin Fingal, Dublin Mid West, Cork North Central and Wexford. The byelections in these constituencies will take place on Friday, 29 November next.

Bus shelters, DART and train stations and local newspapers in the region will all feature #CARECANTWAIT campaign messaging for the two weeks in the lead into the byelection vote.

The #CARECANTWAIT campaign posters will be placed in several prominent places, with a focus on commuters in the capital. These include Heuston, Connolly and Pearse stations, DART stations from Balbriggan to Kilbarrick and bus shelters close to hospitals such as Beaumont, the Mater, St. James, Tallaght, Connolly, and Crumlin Children’s Hospital and within key Government Ministers’ constituencies and the byelection constituencies.

The campaign was first launched in June 2019 on social media and focuses on the long wait times of patients seeking to access acute public hospital care. Figures published on Friday last by the National Treatment Purchase Fund, found that there were 567,221 people (end October) waiting for an outpatient appointment with a hospital consultant.

When other categories of patients on other hospital waiting lists, such as those on inpatient or planned procedure lists, are also added there is now a total of one million people nationally waiting for public hospital care.

Even within the hospital catchment areas of the four byelection constituencies there are a total of 378,534 patients now waiting for hospital care.

According to the IHCA, the long wait times experienced by patients is a result of the ongoing consultant recruitment crisis and a shortage of hospital beds.

In respect of the former, over 500 or one in five of all permanent consultant posts are now unfilled and the shortage of consultants is increasing the wait times of patients across Ireland.

This is due to the Government’s discriminatory pay disparity policy imposed in October 2012, which has been presided over by three successive Ministers for Health.

This ongoing discrimination against new consultants is driving the highly trained specialist consultants that our public hospitals need, to practise abroad and in private hospitals. This is the root cause of the record waiting lists and delays in providing public hospital care to the hundreds of thousands who are currently being deprived of it due to the government’s complacency.

The Departments of Health and Public Expenditure and HSE, earlier this month, held its first meeting with the IHCA to address the deteriorating consultant recruitment crisis.

The IHCA, at the time, emphasised the importance of these talks being accelerated to resolve the consultant recruitment crisis and to properly tackle the unacceptable waiting lists. A further meeting has yet to be scheduled by the Government’s representatives.

According to IHCA President Dr Donal O’Hanlon: “The IHCA is not a political organisation and we do not support any politician or party over another, but as consultants on the front line of hospital care we are compelled to advocate for our patients and to support their right to timely access to care and improved hospital services.

“Ireland is a small country, with a relatively good standard of living, which has the capacity to provide its population with high quality, accessible hospital care. Yet there is a reluctance and complacency amongst Government and policymakers to address the root causes of the problems in our public hospital services – the 500 unfilled consultant posts and the shortages of beds.

“The IHCA is escalating the CARECANTWAIT campaign driven by the urgent need to improve services and access to hospital care for our patients.

“Our hospital consultants are now asking the public and voters to stand up for the rights of the patients among their families, friends and communities. We must all collectively demand that politicians work to immediately address the problems in our hospital services –filling the existing 500 consultant vacancies and opening more beds across our public hospitals”.

Number of patients waiting for treatment at acute public hospitals in byelection constituencies*: